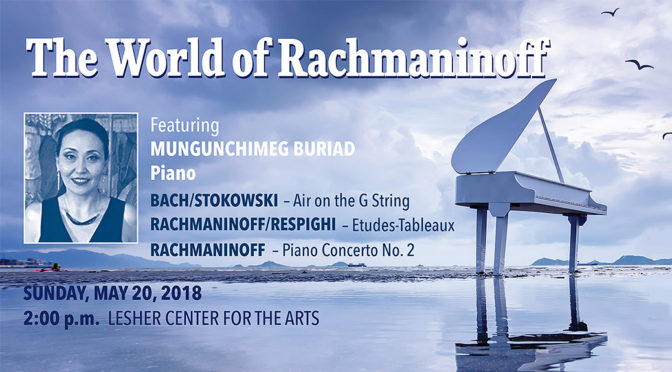 In our final concert of the 2017-2018 season, join the Diablo Symphony as we delve deep into the musical nostalgia of the mid-twentieth century with two great orchestrators: Ottorino Respighi and Leopold Stokowski. Then, prepare to be stunned by the extraordinary playing of Walnut Creek pianist Mungunchimeg Buriad in Rachmaninoff’s great Second Piano Concerto!

Mungunchimeg Buriad was born in Ulaanbaatar, Mongolia, where she received her early music training. She went on to the Gnessin Russian Academy of Music in Moscow, where she studied with Larisa Pogorelova. Ms. Buriad served as the Principal Solo Pianist of the Mongolian State Opera and Ballet Theatre from 1990 to 1998. In 1998, she moved to the United States and served as Company Pianist at Ballet Chicago and Joffrey Ballet until 2014; she also performed as soloist with the Chicago Philharmonic and the Chicago Sinfonietta. Ms. Buriad joined San Francisco Ballet in 2014 and has since pursued a busy schedule as Company Pianist and Soloist. She will be performing the Piano Concerto No. 2 by Sergei Rachmaninoff (1873-1943), who wrote the concerto after a long period of depression and writer’s block caused by critical reaction to his first symphony. The work was dedicated to Nikolai Dahl, who helped with Rachmaninoff’s recovery. The composer himself premiered the work in 1900 and despite (or because of) the virtuostic demands it requires from the pianist, it has remained hugely popular ever since.

Leopold Stokowski (1882-1977) was a conductor and music director most famous for his long leadership of the Philadelphia Orchestra. He also conducted for film and made an appearance in Disney’s Fantasia. Stokowski orchestrated numerous pieces, including the 2nd movement of Johann Sebastian Bach’s Orchestral Suite No. 3 in D major, also known as “Air on the G String”.

Ottorino Respighi (1879-1936) was an Italian composer and conductor at the turn of the twentieth century. In 1931, the conductor Serge Koussevitzky approached both Respighi and Rachmaninoff about Respighi orchestrating several of Rachmaninoff’s Études-Tableaux for piano, with the specific pieces to be chosen by Rachmaninoff himself. He selected five of the twenty-four and provided hints about their inspirations to Respighi – hints Rachmaninoff had not ever previously revealed – who then rearranged the order, created titles from Rachmaninoff’s guidance, and created a brilliant orchestration.