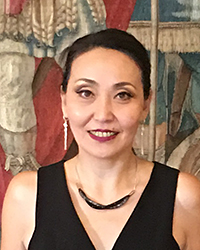 Mungunchimeg Buriad was born in Ulaanbaatar, the capital of Mongolia, and received her early music training there. She went on to the Gnessin Russian Academy of Music, a prominent music school in Moscow, where she studied with Larisa Pogorelova and received a Bachelor’s Degree in Performance, Teaching and Accompaniment. Ms. Buriad served as the Principal Solo Pianist of the Mongolian State Opera and Ballet Theatre in Ulaanbaatar from 1990 to 1998. In 1998 she moved to the United States and served as Company Pianist at Ballet Chicago and Joffrey Ballet from 1998 to 2014. During her time in Chicago she also performed as soloist with the Chicago Philharmonic and the Chicago Sinfonietta. Ms. Buriad joined San Francisco Ballet in 2014 and has since pursued a busy schedule as Company Pianist and Soloist. She has performed as a soloist on both piano and harpsichord with the Ballet several times, including performances of Christopher Wheeldon’s Continuum with music by György Ligeti, Helgi Tomasson’s 7 for Eight with music by J. S. Bach, Alex Ratmansky’s Seven Sonatas, music by Domenico Scarlatti and Jiří Bubeníček’s Fragile Vessels, which features Rachmaninoff’s Second Piano Concerto. Ms. Buriad, in addition to being the mother of three thriving children, is the proud recipient of the Washington DC Immigration Achievement Award presented to her by the American Immigration Council in 2004. She resides in Walnut Creek.