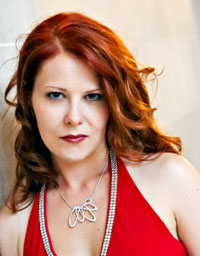 Recent highlights from the operatic stage include the title role in the world premiere of Death with Interruptions by Kurt Rhode and Curley’s Wife in Carlisle Floyd’s Of Mice and Men. Other notable appearances include Susanna in Le Nozze di Figaro with Vancouver Opera and New Orleans Opera; Konstanze in Die Entführung aus dem Serail with West Bay Opera ; The title role of Lucia di Lammermoor with Syracuse Opera and Green Mountain Opera Festival; Ophelia in Hamlet with Opera Lyra Ottawa; several roles in the world premiere of Dolores Claiborne by Tobias Picker, Gianetta in The Elixer of Love, Papagena in The Magic Flute, Barbarina in Le Nozze di Figaro with San Francisco Opera; Nanetta in Falstaff and as Mabel in The Pirates of Penzance with Edmonton Opera; Rosina in The Barber of Seville, Marie in The Daughter of the Regiment, and Norina in Don Pasquale with Manitoba Opera.

A highly adept interpreter of a wide range of repertoire spanning from the baroque to contemporary music, Ms. Einfeld has made guest appearances on the concert stage with the San Francisco Symphony, Berkeley Symphony Orchestra, The Marin Symphony, Winnipeg Symphony Orchestra New Music Festival, Calgary Philharmonic Orchestra, and the Empyrean Ensemble. As a champion of contemporary music she regularly performs premieres by modern composers and has recently been appointed a member of the Left Coast Chamber Orchestra. Her collaboration with this ensemble will further explore her love for the concert stage and the pairing of new works with traditional masterpieces. Ms.Einfeld is a former Adler Fellow and Merola Alumnus with the San Francisco Opera, and also received acclaim as a Grand Finalist in the 2006 Metropolitan Opera National Council Auditions. Upcoming engagements include appearances with Left Coast Chamber Orchestra; The Mendocino Music Festival as Konstanze in Mozart’s Die Entführung aus dem Serail; Several concerts with The Valley of the Moon Music Festival, and the Controller in Flight with Opera Parallele.