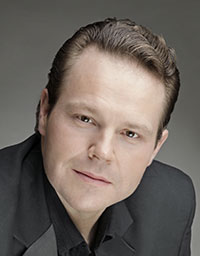 Praised as having “power, sure intonation, and fine diction that comes in a package tied with a ribbon of ‘natural sound” tenor, Christopher Bengochea has delighted audiences with his unique combination of vocal and dramatic interpretations in performances ranging from oratorio to opera. It is a unique, broadly-projected “wide” sound that can serve lyrical or heroic music equally well.” San Jose Mercury News

Bengochea has performed the title role of Ernani and the Chicago Tribune described his performance as “flawless….He has command of Italianate style along with ringing top notes and a smooth legato – a fine, even dramatic, tenor in the making”. This award winning tenor also performed the title role in Poliuto The Chicago Sun Times noted, “with his ringing sound and elegant phrasing, Bengochea was the very model of the martyred hero.”

Recent engagements included the title role in Offenbach’s Les contes d’Hoffmann for Palm Beach Opera (singing in three performances on three consecutive days!) in March 2014, the tenor part in the Verdi Requiem with the San Jose Symphony, Vasco da Gama in Meyerbeer’s L’Africaine and a Meyerbeer Retrospective concert for Opera Orchestra of New York, the title role of Idomeneo for Opera San Jose, Rodolfo in La boheme and Cavaradossi in Tosca with Opera Santa Barbara and the title role in Les Contes d’Hoffman, for West Bay City Opera in San Francisco as well as Jose in Carmen at Livermore Valley Opera Festival. He was tenor soloist with the Santa Rosa Symphony in a Verdi Gala concert and was the featured tenor soloist at Zurich’s Tonhalle in a Verdi Gala staged by the late Lotfi Mansouri and conducted by Edoardo Muller in December 2012. Bengochea sang his first Radames in Aida in Montana and his first Canio in Pagliacci at the Bosie Arts Center in spring 2013.

For three seasons Mr. Bengochea has been a resident artist of Opera San José where he has been heard in a variety of roles from Reverend Samuel Parris in The Crucible to King Gustavus in Un ballo in maschera. Richard Scheinin of The Mercury News described “to hear Bengochea expand into big, lusty high notes — Verdi specials — were thrilling…. Bengochea could be the tenor the company has been waiting for.” During his residency at Opera San Jose he performed La Boheme, Rigoletto, Die Zauberfloete, La traviata, Madame Butterfly, Lucia di Lammermoor, and the title roles of Werther and Romeo et Juliette.

At home on both the operatic and concert stages, he was heard as the Evangelist in Bach’s Weihnachts Oratorium with the New York City Chorale Society. Other oratorio engagements include: Mendelssohn’s Lobgesang, and Tallis’s The Lamentations of Jeremiah the Prophet and Mozart’s Great Mass in C minor, Beethoven’s Symphony No. 9, Verdi Requiem, the world premier of Alva Henderson’s “From Greater Light,” performed under world renowned Carl St. Claire and the Orange County Symphony Orchestra.

This Basque American tenor holds both USA and EU (France) nationality and he began his musical career as a pianist then moved into the study of opera during his time at Montana State University and later the University of Montana. After becoming an award winner at the Northwest Regional Metropolitan Opera National Council Auditions and winning third prize at the Internationale Societa Concertistica Vocal Competition in Santa Margherita-Ligure, Italy, he decided to pursue singing entirely. It was in Italy where Bengochea had the opportunity to study and work with renowned tenor, Gianni Raimondi who described Bengochea as “having a voice most brilliant and romantic: that will become very important in the future of opera”.