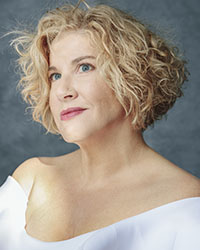 A champion of new music, she helped spearhead the performance of eight song premieres by eight different renowned composers for an alte/neue lieder fest with LIEDER ALIVE! including Daron Hagen, David Conte, Kurt Erickson, and Henry Mollicone. In 2022 she will premiere a new song set by Tarik O’Regan as a part of the same series. Her collaborations with living composers included a recital of works by Jake Heggie, with the composer himself at the piano. She has also premiered works by philanthropist Gordon Getty with the Russian National Orchestra and San Francisco Opera, most recently in a reading of his opera Plumpjack with Lester Lynch. She was recently featured in the SF Noontime Recital Series honoring the 20th anniversary of 9/11 with a streamed performance of Ned Rorem’s “Aftermath” and Kurt Erickson’s “Here, Bullet”.

Heidi has also garnered recognition in major vocal competitions, including the Metropolitan Opera National Council Auditions (NYC First Place Winner), the Liederkranz Awards, the MacAllister Awards, and the KDFC competition which resulted in a performance with pianist Lang Lang. In 2019 she was awarded a ‘Best in the Bay’ award for her Richard Strauss recital featuring John Parr of Deutsch Oper Berlin at the piano.

In addition to her musical life, Heidi graduated with a double biology and music degree from Oberlin and a masters in biochemistry at the University of Pennsylvania. She studied telomeres at Rockefeller University and has several publications, including a landmark paper in the journal Cell which was featured in the New York Times elucidating a revolutionary discovery that the ends of DNA are looped.

Her interest in voice science came from her work in the lab of the late Richard Miller at Oberlin whom she met at age 17. Throughout her career, she has collected historical vocal pedagogy texts and scientific papers both inside and outside the field to fuel her unique perspective on singing. In 2007, a rare cranial nerve injury sidelined her singing career, and both doctors and teachers warned her she may not ever perform again. Using her own scientific research and strategies, particularly in how speech and singing is processed in the brain, she rehabilitated to return to the art she loves. She has applied these concepts and designed a novel pedagogy to train singers of all levels, including those who struggle with auditory processing, PTSD, tongue cancer damage, and MPA.

IIn addition to a private studio, Heidi teaches vocal physiology at the San Francisco Conservatory of Music. She has been an invited speaker at the NATS National Conference,The Pacific Voice Conference, Cleveland Institute of Music, University of Oregon, Vocal ProcessUK, Vocology In Practice, and NerdNiteSF. Her courses on Singing in the Brain have been featured at the VoiceWorkshop UK, SingSpace, and through her private studio.This year she was also featured as a keynote speaker for the British Voice Association Conference alongside Johan Sundberg, Her writings have appeared in blogs, such as The Naked Vocalist and in her journal club entitled “Minding the Gap: connecting research from basic science and neuroscience to vocal pedagogy”. She is the wife of composer/pianist Kurt Erickson, winner of the NATS Art Song Prize, and they proudly parent 4 children together.