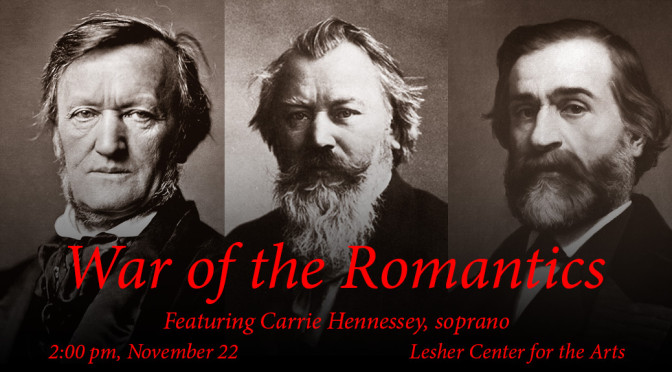 Can the heated debate between lovers of Wagner, Verdi and Brahms ever be settled? Our second set features our very own clash of these classical music titans, brought to life by our guest soprano Carrie Hennessey. Listen, and judge for yourself.

Richard Wagner (1813-1883) was a German composer widely considered to be one of the great opera composers of the Romantic period. His music is richly expressive and is evocative of the raw emotion of the drama on the stage. Tristan und Isolde , composed between the years of 1857 and 1859, is based on a doomed romance from Arthurian Legend. The “Prelude” opens the opera with four notes that lead into Wagner’s famous “Tristan Chord,” whose unresolved dissonance is hard to ignore and could represent unfulfilled Romantic desires. In performance, the “Prelude” is often followed as it is here by the “Liebestod” which closes the opera. It ends as it begins, with a slow buildup to a thunderous climax where the Tristan chord is finally resolved as music and feeling become one.

While not always considered a Romantic composer, Wolfgang Amadeus Mozart (1756-1791) certainly set the stage for the future Romantic composers. The Marriage of Figaro is an opera buffa in four acts composed in 1786. “Dove Sono, I bei momento” (Where are they, the beautiful moments?) takes place in the third act. It is sung by the Countess as she ponders the loss of her happiness due to her husband’s illustrious affair. The aria is full of the feeling of longing — longing for the moments of joy and pleasure that she has lost, while still clinging to the memory of them.

By the end of the 19th century Italian opera had dominated Europe, with Giuseppe Verdi (1813-1901) being one of the major players. Verdi’s writing is well suited for the voice and his operas often feature a virtuosic soprano. Il Trovatore, written in 1850, is a dramatic opera in four acts set in 15th century Spain. “Tacea la Notte Placida” takes place during one of the opera’s most celebrated scenes, as Leonora describes how her lover has returned as a troubador to sing to her. I Vespri Siciliani was composed in 1855 as a five act opera based on the 13th century rebellion of Sicily against French rule. “Merci Dilette Amiche” begins the final act: the duchess Helene is about to be married to a young Sicilian, Henri. She is singing of her great joy in a dance like fashion, but her joy is tempered because their wedding bells will be the signal for the Sicilian uprising and massacre of the French.

Composed in 1885, the Symphony No. 4 by Johannes Brahms (1833-1897) is the most contemporary piece on the program. It is fitting that this piece ends the program, as the term “War of the Romantics” refers to the clash between ‘progressive’ and ‘conservative’ composers at the end of the 19th century. The conservatives were led by Brahms, Schumann and Mendelssohn who preferred absolute music (music for music’s sake alone), while the progressives were led by Wagner, Berlioz, and Liszt who were proponents of program music (music with an extra musical narrative). This work, the last of Brahm’s symphonies, begins with a 1st movement centered around a deceptively simple melody based on falling thirds. The 2nd movement is written in the ancient Phrygian mode which seems to express an overall sorrowful mood, which is contrasted by the jubilant 3rd movement Scherzo. The 4th movement is a symphonic passacaglia with 30 variations based on a theme from Bach’s Cantata No. 150, which wends its way to a powerful, minor key cadence.