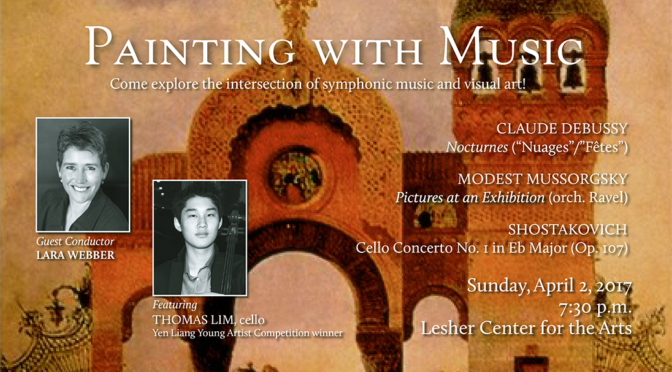 This program highlights musical compositions inspired by paintings: Debussy‘s Nocturnes, and Mussorgsky‘s masterpiece, Pictures at an Exhibition. Our guide to these works of art is guest conductor, Lara Webber. Widely admired as a dynamic and engaging conductor, Lara brings a broad range of experience to the podium, including positions as associate conductor of the Baltimore and Charleston Symphony Orchestras, and guest conductor of the symphony orchestras of Annapolis, Bangor, Houston, Pittsburgh, San Antonio, Louisville, Colorado Springs, and Modesto. At home with the Livermore-Amador Symphony, Lara actively advocates for the arts as an essential part of the educational curriculum and a vital part of our culture.

We also proud to feature the winner of this year’s Yen Liang Artist Competition, Thomas Lim. Thomas, 15, currently studies cello with Jonathan Koh at the California Music Preparatory Academy. After his debut at age 14 in February 2016, Thomas has performed at Carnegie Hall twice, and has won awards in many competitions, including the American Fine Arts Festival, the Korea Times Youth Music Competition, and San Francisco Youth Talent Competition. Thomas will be performing Dmitri Shostakovitch’s (1906-1975) fiery Cello Concerto No. 1, which was composed in 1959, dedicated to Mstislav Rostropovich, and widely considered one of the most difficult concert works for cello.

Claude Debussy (1862-1918) wrote the Nocturnes after being inspired by a set of paintings by the American artist James McNeill Whistler. Debussy himself wrote that he was interested in capturing the “various impressions and the special effects of light”, especially the “grey tones lightly tinged by white” in Nuages (“Clouds”), and the “vibrating, dancing rhythm of the atmosphere” associated with a festive procession in Fêtes (“Festivals”).

Modest Mussorgsky (1839-1881) was inspired by a posthumous exhibit in 1874 of watercolors and drawings by his friend, Victor Hartmann, who had died suddenly the previous year. Pictures at an Exhibition pays homage to ten of the artist’s canvasses, and is one of Mussorgsky’s most famous works. Though the original was composed for piano, many of the performances of the work are of the orchestrated version of the masterpiece, arranged by Maurice Ravel in 1922. The vignettes illustrated by Hartmann and brilliantly brought to life by Mussorgsky and Ravel include children at play in Parisian gardens; a ballet dance of newly hatched chickens (still in their shells!); a Polish wagon drawn by lumbering oxen; and the finale, a grand procession with chanting and ringing bells through the Great Gate of Kiev.