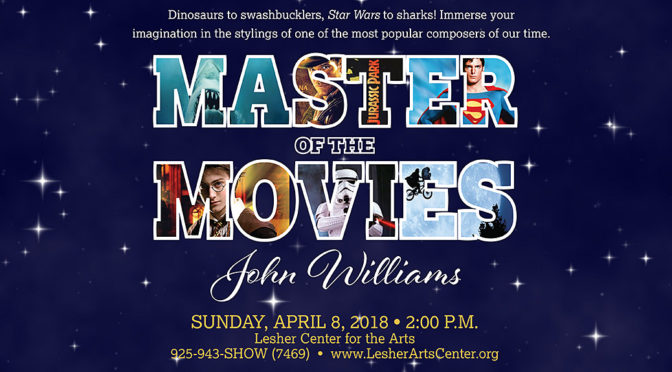 Dinosaurs to swashbucklers, Star Wars to sharks, John Williams has given voice to a generation through his movie music. We will perform selections from some of William’s beloved works, including Superman, Star Wars and Harry Potter. Come to the symphony and immerse your imagination in the stylings of one of the most popular composers of our time. Costumes encouraged!

Over a career spanning five decades, John Williams has been one of America’s most accomplished and successful composers for film and for the concert stage. He has served as music director and laureate conductor of the Boston Pops Orchestra, and he maintains artistic relationships with many orchestras including the Boston Symphony Orchestra, the New York Philharmonic, the Chicago Symphony and the Los Angeles Philharmonic. Williams has composed the music and served as music director for more than one hundred films, including Schindler’s List, E.T.: The Extra-Terrestrial, Jaws, Jurassic Park, Close Encounters of the Third Kind, four Indiana Jones films, all seven Star Wars films, and the first three Harry Potter films. He has received a variety of prestigious awards, including the National Medal of Arts, the Kennedy Center Honor, the Olympic Order, and numerous Academy Awards, Grammy Awards, Emmy Awards and Golden Globe Awards; his five Academy Awards and 50 Oscar nominations make him the Academy’s most-nominated living person and the second-most nominated person in the history of the Oscars.