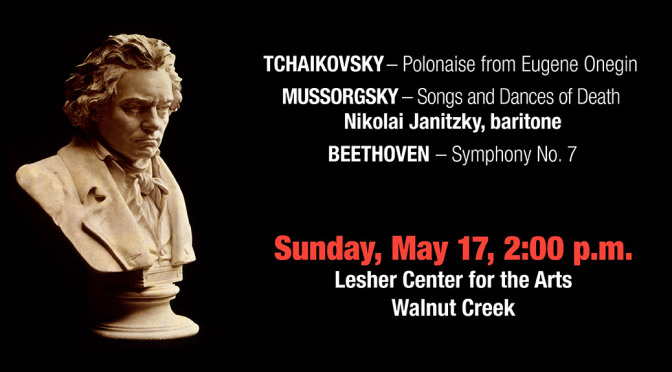 Our final concert of the 2014-2015 season features Ludwig van Beethoven’s Symphony No. 7 in A major. It was warmly received by its audience upon its premiere in 1813, and Beethoven himself considered it one of his finest works. The rhythmic vitality throughout the work prompted Richard Wagner to proclaim that “The Symphony is the Apotheosis of the Dance itself: it is Dance in its highest aspect, the loftiest deed of bodily motion, incorporated into an ideal mold of tone.”
Written in four movements, the first movement begins with a long introduction that transitions to a Vivace dominated by a lively dance-like dotted rhythm. The second movement has remained one of the most popular movements in Beethoven’s symphonies, and is noteworthy for a fairly static theme dominated by rhythm rather than melody. The third and final movements are full of dance-like vitality, leading to a climax with the first use of a triple forte (fff) in any of Beethoven’s works.

This concert will also feature our guest artist Nicolai Janitzky. A California native, Mr. Janitzky has performed with companies throughout North America and Asia, has been the recipient of many awards including those from the Sullivan Foundation, the George London Foundation, Opera Index, and the Marilyn Horne Foundation, and has appeared in concert at Carnegie Hall, the Kennedy Center in Washington, D.C., and the Cleveland Institute of Music’s Art Song Festival. He will be performing Songs and Dances of Death by Modest Mussorgsky, a powerful song cycle which explores the images and feelings concerning death and its affect on human experience.

The Polonaise from Pyotr Tchaikovsky’s opera Eugene Onegin rounds out our program. This opera was Tchaikovsky’s most successful one and is regularly performed on the modern stage. The Polonaise (a dance of Polish origin) is the centerpiece of Act III, where the eponymous anti-hero Eugene Onegin recognizes the hostess of the ball, Princess Gremina, as the Tatyana whose love he had rejected many years ago – an action he now bitterly regrets.