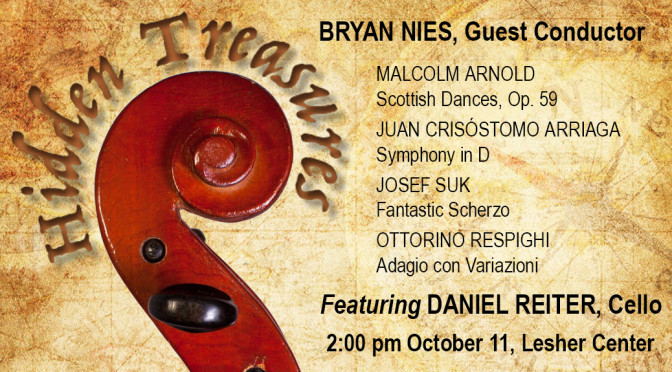 We kick off our 53rd season with a sparkling program of hidden classical music gems, featuring our guest conductor Bryan Nies and cellist Daniel Reiter.

Four Scottish Dances is a collection of tuneful, evocative melodies originally composed in 1957 for the BBC Light Music Festival by British composer Sir Malcolm Arnold (1921-2006). Born in Northampton in October of 1921, Arnold began his musical career playing principal trumpet for the London Philharmonic Orchestra. By the time he was thirty, he had turned his attention fully to composition and was one of the most sought after British composers of the time, along with Benjamin Britten and William Walton. He was an avid film composer with over 120 film scores to his name, including the Oscar-winning score for Bridge on the River Kwai in 1957.

Lovers of the symphonic genre will find much familiar about the Symphony in D by Juan Crisóstomo Arriaga (1806-1826). Although Arriaga only lived a short 19 years, the Spanish violinist and composer was able to accomplish much. Some refer to him as the “Spanish Mozart” because, like Mozart, he was a virtuoso child prodigy and a prolific composer who unfortunately died young. By the time he was eleven, he had written his first piece of music, and age thirteen had composed his first opera, Les esclavos felices, which received its first performance in Bilbao. Composed in 1824, the Symphony in D was one of Arriaga’s final compositions. Although Arriaga was of Spanish decent, there is nothing inherently Spanish sounding in this piece. It is written for classical orchestra and follows classic symphonic form, evoking other great symphonies composed by his European contemporaries Schubert and Beethoven. It is not fully in either D major or D minor, which adds to the intrigue of the piece.

The “Fantastic Scherzo” by Czech composer and violinist Josef Suk (1874-1935) is a brilliant, good-spirited orchestral work. Written in 1903, it falls in the middle of his career and shows the influence of his composition teacher Antonin Dvořák. Suk was one of Dvořák’s best students, and Dvorak became one of Suk’s biggest influences and mentors – so much so that Suk ended up marrying Dvorak’s daughter Otilie. “Fantastic Scherzo” is scored for full Romantic orchestra, and employs the typical scherzo rhythm of dotted triple time groups, which adds to the feeling of propulsive motion of this piece.

Ottorino Respighi (1879-1936) was an Italian composer, conductor, string player, pianist and teacher at the turn of the twentieth century. The Adagio con Variazioni originates from an 1902 unpublished cello concerto to which he returned in 1921 and re-worked into the middle movement. Adagio con Variazioni is dedicated to cellist Antonio Certani, Respighi’s friend and colleague from Bologne. The orchestra plays an equal role to the cello in this piece, with the two exchanging and bringing to life the lush beautiful thematic melodies. In this piece Respighi brings together the form and complexity of the Classical and the Baroque period, with the sweeping emotionality of the Romantic.