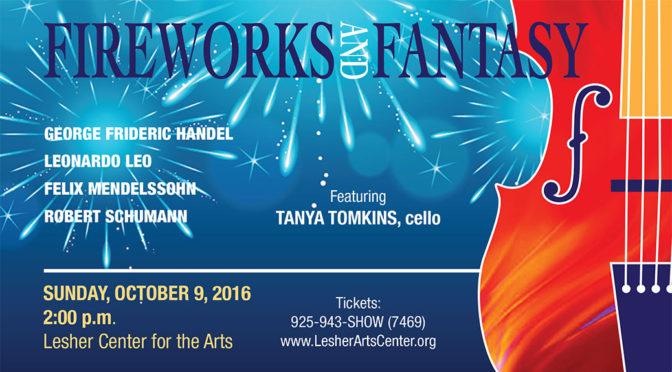 The Diablo Symphony Orchestra’s 54th Season opens with a bang! Fireworks and Fantasy will feature guest cellist Tanya Tomkins, playing the Cello Concerto in A major by Leonardo Leo. The program will also feature Handel’s Fireworks Music, the Overture for Winds by Mendelssohn and Robert Schumann’s Symphony No. 4.

Specializing in Baroque performance, Tanya Tomkins has given master classes at Julliard, Yale, and the San Francisco Conservatory of Music. In addition to her current positions as Co-Principal Cellist in both the Portland and Philharmonia Baroque orchestras, she has performed as a soloist with various orchestras and festivals throughout the world.

Leonard Leo (1694-1744) was a Neapolitan composer of the later Baroque, who composed a total of six cello concertos. The early Romantic composers Mendelssohn and Schumann were passionate about the music of the Baroque period, and were among the first composers to start performing the works of times past. We will combine the fireworks and flare of the ornate Baroque music with the world of fantasy and imagination of these two friends from Leipzig, Germany. Please join us for this incredible season-opener!