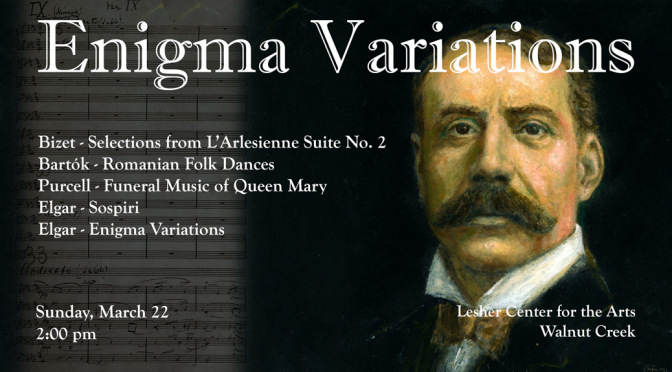 This concert features Elgar’s Enigma Variations. Completed in 1899 and arguably Elgar’s finest work, it is composed of a series of musical portraits based on friends and family of Elgar. His wife, Caroline Alice Elgar, inspired the First Variation; the Eighth Variation was meant for a matron of the arts, Winifred Norbury, who had a distinctive laugh; and a friend’s bulldog was the muse for the Eleventh Variation. We will also be playing Elgar’s Sospiri, which was written for strings and harp and first performed just prior to World War I in 1914. A short yet nostalgic adagio filled with melancholy beauty and intensity, it was most likely influenced by the death of a dear family friend, American Julia “Pippa” Worthington.

Consisting of French folklike themes, Bizet’s L’Arlesienne Suite No. 2 was premiered in 1872, with Bizet playing backstage on the harmonium. We will also perform excerpts from Bartók’s Romanian Folk Dances, originally played on shepherd’s flute or fiddle. Written in 1915 and based on Romanian music from Transylvania, these selections will be conducted by last year’s gala winner, Diablo Symphony board member Elaine McClintic!

Purcell’s Funeral Music of Queen Mary is a simple and stately march played at the funeral of Queen Mary II of England in 1695—coincidentally, Purcell died later that same year, at the age of 36, and excerpts of this piece were played at his own funeral. Interestingly, almost 280 years later, Wendy Carlos recorded a version of this work, using a Moog synthesizer, for Stanley Kubrick’s movie A Clockwork Orange.