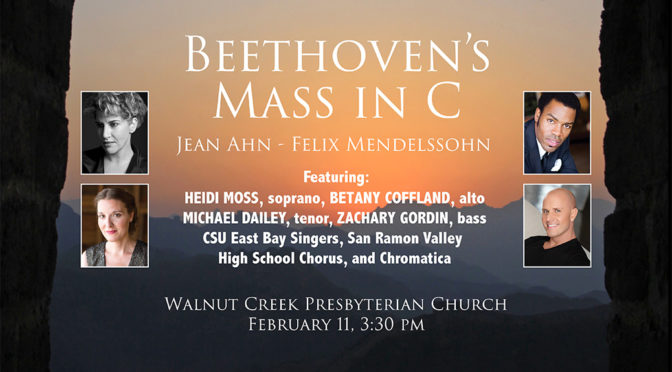 This concert takes us around the globe! Bay Area composer Jean Ahn’s work, based on a Korean farming song, starts our journey. We explore the caves off the coast of Scotland with Mendelssohn, and finish with Beethoven’s stunning but underappreciated Mass In C. The concert features guests soloists Heidi Moss, Betany Coffland, Michael Dailey, and Zachary Gordin, as well as the choirs of Chromatica, CSU East Bay and San Ramon Valley High School.

Jean Ahn is a composer based in San Francisco, originally from Korea. Chamber music, orchestra music, choir music, and Asian traditional music with electronics feature prominently in her works. Her education includes a Ph.D in composition from UC Berkeley and B.M and M.M from the Seoul National University. Ongheya is based on a traditional Korean farming song.

Felix Mendelssohn (1809-1847) sent the first bars of his “concert overture” The Hebrides to his sister Fanny in 1829, after visiting Fingal’s Cave on the Island of Staffa off the west coast of Scotland. He completed and revised the work over the next three years. The work does not tell a story, but evokes the stark and beautify scenery of the Hebrides Islands that Mendelssohn saw on his trip.

Ludwig van Beethoven (1770-1827) composed the Mass in C major, Op. 86, on commission from Prince Nikolaus Esterházy II in 1807. Unfortunately, due to lack of rehearsals and Beethoven’s growing deafness, its first performance was a failure and the Prince was displeased; Esterházy may have thought that Beethoven’s Mass was too similar in style to Haydn. (Although Beethoven spent much time studying the Haydn masses before writing his own, the Mass in C is clearly a masterpiece in its own right, with all the hallmarks of its author). In his own words, Beethoven focused more on the sense of the human being entering the church, and in the Kyrie, “heartfelt devotion from which comes the warmth of religious feeling.. gentleness is the basis of the whole work.. yet there is cheerfulness in the whole”. Although not as revolutionary as many of his other works, there are many Beethovenesque dramatic gestures such as sudden transitions from C major to C minor, as well as moments of what E.T.A. Hoffmann described as the “expression of a childlike serene mind”.