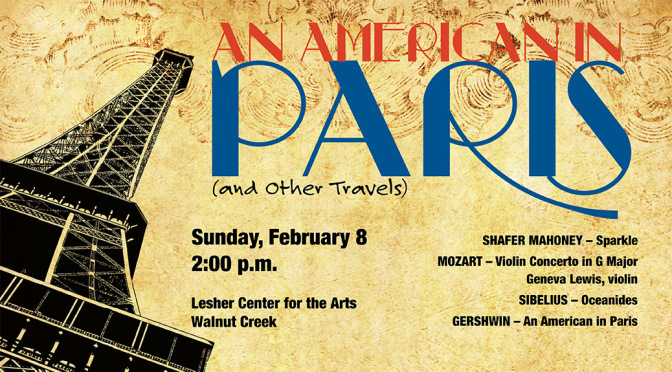 Our next concert features George Gershwin’s symphonic poem “An American in Paris”, one of his most popular and enduring compositions. Written in 1928, it was commissioned by the New York Philharmonic. While shopping for Parisian taxi horns to take back to the US, Gershwin was inspired to capture in music the sights and sounds of the streets of Paris – including those taxi horns, which are part of the instrumentation! In Gershwin’s original program notes, he wrote: “My purpose here is to portray the impression of an American visitor in Paris as he strolls about the city and listens to various street noises and absorbs the French atmosphere.” When the tone poem moves into the blues, “our American friend … has succumbed to a spasm of homesickness.” But, “nostalgia is not a fatal disease.” The American visitor “once again is an alert spectator of Parisian life” and “the street noises and French atmosphere are triumphant.”

We will also be featuring Geneva Lewis performing Mozart’s Violin Concerto in G Major. Geneva is a merit scholarship student at the Colburn Community School of Performing Arts in Los Angeles, where she studies with Aimee Kreston, concertmaster of the Pasa- dena Symphony. Lewis made her orchestral debut at age 11 and has since matured into an exceptional violinist whose performances have garnered her first-prize wins in numerous competitions.

This concert will also include an optimistic and celebratory piece by American composer and faculty member of the Juilliard School Shafer Mahoney entitled “Sparkle,” as well as Finnish composer Jean Sibelius’ “Oceanides” (written for his one and only trip to the United States).