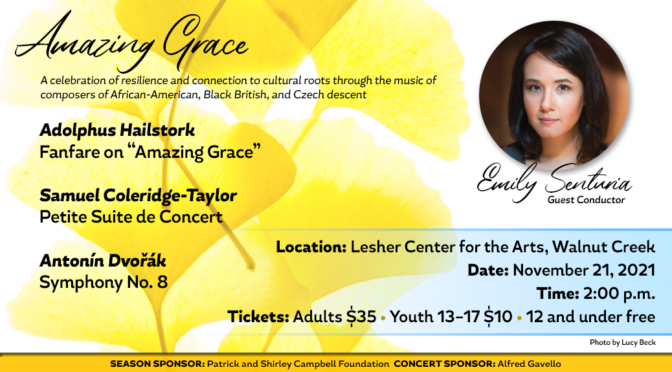 Welcome to the Diablo Symphony Orchestra’s 59th season! Finally together after more than a year away from the stage, the orchestra invites you to join in celebrating the return of live music! This first concert of the 2021-22 season, directed by guest conductor Emily Senturia, will begin at 2:00 pm on Sunday, November 21 at the Lesher Center for the Arts, located at 1601 Civic Drive, Walnut Creek.

Titled “Amazing Grace”, this musical tribute to resilience and connection to cultural roots features works by composers of African-American, Black British and Czech descent. The program opens with Adolphus Hailstork’s 2011 orchestral Fanfare on “Amazing Grace”, which weaves fragments of one of West’s most familiar hymns into an exhilarating fanfare. Although an Anglican priest when he wrote the words “Amazing grace! (how sweet the sound) That sav’d a wretch like me!”, Newton had been an English slave trader before transforming experiences led him to become a cleric and active abolitionist. 20th century American composer Hailstork’s works, while continuing European classical tradition, reflect the influence of his African American heritage and spirituals sung and loved since childhood.

The program concludes with Antonín Dvořák’s fittingly cheerful and optimistic Symphony No. 8 in G major. Born in Bohemia (the westernmost and largest historical region of the Czech lands in the present-day Czech Republic), Dvořák was passionate about his homeland and its traditional music, incorporating it widely in his 19th century Romantic compositions. Composed in 1889, the 8th Symphony employs a variety of melodic themes, many of them based on Bohemian material. It was dedicated by the composer “To the Bohemian Academy of Emperor Franz Joseph for the Encouragement of Arts and Literature, in thanks for my election”; Dvořák himself conducted the work’s premiere in Prague in 1890.