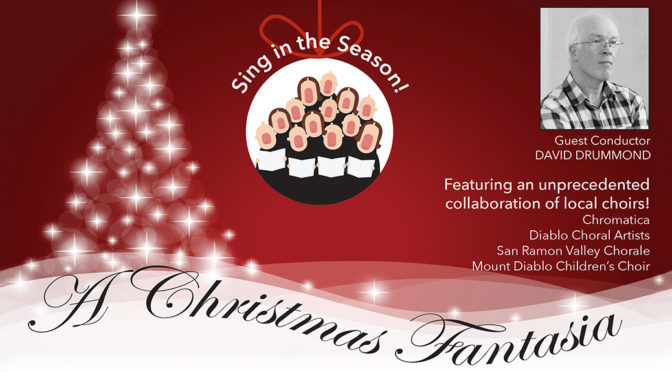 Choirs from the Walnut Creek and Danville area join the DSO to present a compendium of festive Christmas carols and symphonic works from around the world. Holiday favorites such as "Twas the Night before Christmas" and "Frosty the Snowman" pair with Fantasia on Christmas Carols by Ralph Vaughan Williams, and a set of carols in the style of Carmina Burana by American composer Christopher Rouse. This concert will be conducted by guest conductor David Drummond, with featured baritone Matt Hanscom, and Chromatica, Diablo Choral Artists, San Ramon Valley Chorale, and Mount Diablo Children’s Choir.

David Drummond has conducted opera for English National Opera, Gothenburg Opera, Scottish Opera and for Kharkov Opera (Ukraine) and has worked with orchestras including the London Mozart Players, Kharkov Philharmonic, Royal Philharmonic Orchestra, the Brandenburg Sinfonia and the BBC Concert Orchestra. He was Director of Music & Opera at University College, London from 1991-2001, Chorus Master at both Scottish Opera and ENO, and has worked with choirs throughout Britain. Baritone Matt Hanscom began the 2017-2018 season as Escamillo in Carmen with the Spokane Symphony, followed by de Brétigny in Manon for Opera Santa Barbara. During the 2016-2017 season he was heard as Enrico in Lucia di Lammermoor, Figaro in Il barbiere di Siviglia, and Marcello in La Boheme, all with Opera San Jose. Possessing a master’s degree in music from Northwestern University, Matt is an alumnus of many of the nation’s premier training programs.

Fantasia on Christmas Carols was written by the English composer Ralph Vaughan Williams (1872-1958) in 1912 as a single movement work for baritone, chorus, and orchestra. It is derived mainly from four traditional English folk carols along with fragments of other Christmas works.

Christopher Rouse (1949-) is an American composer whose works have won a Pulitzer Prize and a Grammy Award. He is best known for his mastery of orchestral writing; his music has been played by every major orchestra in the U.S, and the New York Times has called it “some of the most anguished, most memorable music around.” Karolju was commissioned by the Baltimore Symphony Orchestra and first performed in 1991; Rouse conceived it as a collection of Christmas carols in a form modeled after the cantata Carmina Burana by Carl Orff.