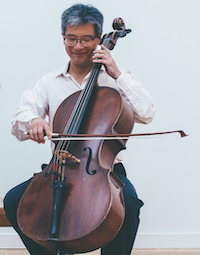 Leighton Fong, longtime member of Left Coast Chamber Ensemble and an advocate for new music, plays regularly with Eco Ensemble, Empyrean Ensemble, and West Edge Opera, and was a member of the SF Contemporary Players. He performed the complete string quartets of Schubert with the Berkeley Schubert Quartet and the complete string quartets of Beethoven with Southwest Chamber Music, Praised for his “sumptuous solo playing” (San Francisco Chronicle), he has served as the Principal Cellist of the California Symphony since 1993, and has taught chamber music and cello at UC Berkeley since 1997. Leighton studied at the San Francisco Conservatory, the New England Conservatory, the Bern Conservatory in Switzerland, and the Royal Danish Conservatory in Copenhagen, Denmark.