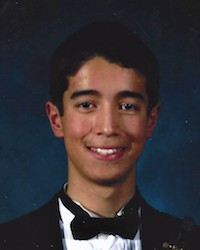 Omar Wahby, 16, is a 10th grader at Franklin High School in Elk Grove, CA. He previously studied with Professor Sandra McPherson and is currently a student of Mrs. Ann Lavin at UC Davis. Omar has been with the Sacramento Youth Symphony (SYS) for six years and is the principal clarinetist of its Premier Orchestra. In 2018, he was accepted into the UC Davis Symphony Orchestra. As a solo clarinetist, Omar was one of the winners in the SYS Concerto Competition in 2017 and also placed first in the 2017 US International Music Competition. Omar began studying piano at 6 and is currently under the guidance of Dr. Natsuki Fukasawa. He has participated in music festivals and received awards in events such as US Open Music Competition, Go for the Gold Music Festival, Classical Masters Music Festival, Festival for New American Music, Auburn Young Artists Competition, and Ghiglieri Piano Competition. He was also a prize winner in the 2017 Crescendo International Music Competition and performed at Carnegie Hall. In addition, Omar’s chamber group placed first in the VOCE Competition representing the Sacramento Region as well as the chamber music competition sponsored by the Sacramento Chamber Music Society.