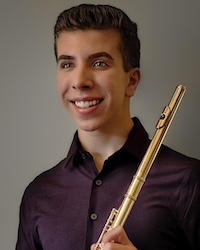 David is thrilled to be performing with the Diablo Symphony Orchestra! In February, he performed Mozart’s Flute Concerto in G with the Livermore-Amador Symphony. David is currently a member of the San Francisco Symphony Youth Orchestra. Previously, he was a member of the Oakland Symphony Youth Orchestra, with which he toured Cuba in the summer of 2016. David also participated in the All-State Honor Band, the Northern California Honor Band, and last summer attended the Interlochen Flute Institute at the Interlochen Center for the Arts in Michigan, where he played in masterclasses led by Paula Robison, Mark Sparks, and Judith Mendenhall. David has also given solo performances for the Junior Bach Festival winner’s recital, the Tri-Valley Solo and Ensemble Festival, and the Livermore School Board. David is a junior at Livermore High School, and is the principal flute of his school’s symphonic band. He is a volunteer tutor for other LHS flutists, and he is a private flute instructor. David is also a math tutor for Green Engineering Academy students at Livermore High School. When he graduates, he plans on pursuing music at a conservatory, and becoming a professional musician. David studies with Susan Waller, formerly with the San Francisco Ballet Orchestra.