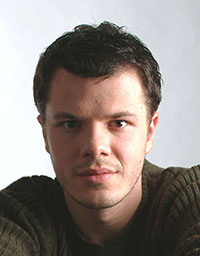 Eugene Brancoveanu is a graduate of the American Institute of Musical Studies in Graz and the Universität Mozarteum Salzburg. He is also a recent winner of the National Young Opera Singer Competition in Leipzig, the International Music Award in Loenberg, and the International Opera contest “Ferruccio Tagliavini”. Recent engagements for Mr. Brancoveanu include Lancelot in Camelot with Virginia Opera; “Songs of a Wayfarer” in a return to Peninsula Symphony Orchestra; was baritone soloist in Mozart’s Requiem with Fresno Philharmonic Orchestra; directed La bohème and sang Marcello for Livermore Valley Opera; and sang in recital at Brookings Harbor Friends of Music.

In recent seasons he sang the title role in Shostakovich’s rarely performed opera, Orango, with Los Angeles Philharmonic, Peter Sellars directing and Esa-Pekka Salonen conducting; sang as soloist in Carmina Burana with the Fresno Philharmonic Orchestra; in Beethoven’s Symphony No. 9 with Marin Symphony, under Alasdair Neale; continued his extensive recital career, performing with Brookings Harbor Friends of Music, and Davis Symphony in opera arias; was featured in the broadcast of Michael-Tilson Thomas’ The Tomashevskys, seen nationally on PBS stations; sang Mahler’s “Songs of a Wayfarer” with Sun Valley Symphony; and as soloist in Carmina Burana with San Francisco Choral Society.

Recent successes include his appearance with the Philadelphia Orchestra, the New World Symphony, and the New York Philharmonic at Carnegie Hall, in Michael-Tilson Thomas’ The Tomashevskys, conducted by the composer, a work which he premiered at Carnegie Hall, has reprised with the New World Symphony, the San Francisco Symphony, the Los Angeles Philharmonic, and at the Tanglewood Music Center under Seiji Ozawa. He recently returned to the Santa Cruz County Orchestra in Beethoven’s Symphony No. 9, sang as soloist in Carmina Burana with Spokane Symphony Orchestra, sang as Marcello in La bohème with Virginia Opera, Gonzalvo in Schreker’s Die Gezeichneten with Los Angeles Opera, the title role in Don Giovanni with Berkeley Opera, Yeletzky in Pique Dame with the Israeli Opera, soloist in Carmina Burana with Santa Cruz County Symphony and with Peninsula Symphony Orchestra, in recital with California’s San Francisco Performances concert series, returned to San Francisco Opera as Belcore in L’elisir d’amore, sang Karnak in Lalo’s Le Roi d’ys with the American Symphony Orchestra, Count in Le nozze di Figaro with Livermore Valley Opera, and as soloist in Elijah with University of California/Davis.

Other highlights include his New York City Opera debut as Pandolfe in Cendrillon, the role of The Pilot in Portman’s The Little Prince for San Francisco Opera, soloist in Brahms’ Requiem with the Alabama Symphony Orchestra, and in a concert of Bernstein repertoire with the Pacific Symphony Orchestra. He made his debut with San Francisco Opera in 2005-06 as Second Prisoner in Fidelio. Also that season he sang the role of Boris in Shostakovich’s Moskau, Tscherkomuschki at Staatstheater Stuttgart. He held a prestigious appointment as an Adler Fellow at San Francisco Opera for two seasons, directly following his critically acclaimed summer 2004 performances of Tarquinius in The Rape of Lucretia with the company’s Merola Opera Program. With San Francisco Opera he has performed Christian in Un ballo in maschera, Marullo in Rigoletto, Moralès in Carmen, Frank in Die Fledermaus, Fiorello in Il barbiere di Siviglia, and the Innkeeper and the Captain in Manon Lescaut.

Originating the role of Marcello in Baz Luhrmann’s Broadway production of La Bohème, the honorary Tony Award winner is also a recipient of a 2004 LA Stage Alliance Ovation Award for his performances of this production in Los Angeles. Other career highlights include performing the role of Nicomedes in the rarely heard Lou Harrison opera, Young Caesar, for Ensemble Paralèlle; a recital as part of the prestigious Schwabacher Debut Recital Series; the title role in Le nozze di Figaro with the International Music Festival in Gut-Immlings, Germany; and the title role in Philip Glass’s Orphée with the Universität Mozarteum Salzburg. Mr. Brancoveanu’s numerous performances with the Romanian State Opera include the Count in Le nozze di Figaro, the title role in Don Giovanni, Silvio in I Pagliacci, Figaro in Il barbiere di Siviglia, Escamillo in Carmen, and Uberto in La serva pedrona.