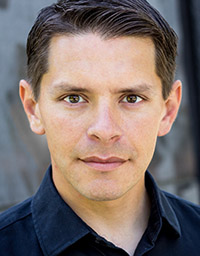 Native-American bass-baritone Daniel Yoder is honored to be singing in concert with the Diablo Symphony! A resident of the Sacramento area, he has been privileged to have performed with such groups as the Sacramento Choral Society and Orchestra, Sacramento Opera, Pocket Opera of San Francisco, Fresno Grand, Opera Academy of California, Schola Cantorum of Sacred Heart Church, the UCDavis Early Music Ensemble, Capella Antiqua, as well as seemingly countless solo and choral engagements throughout the region.

Hailed by the San Francisco Classical Voice for his “powerful” and “accurate” performances, as well as by the Sacramento Press in his ability to deliver “gorgeous solos”, Mr. Yoder has performed the roles of Zurga in Bizet’s Pearl Fishers, Claudius in Handel’s Agrippina, Leporello and Masetto in Mozart’s Don Giovanni, Betto in Puccini’s Gianni Schicchi, Seneca in Monteverdi’s The Coronation of Poppea, Gugliermo in Mozart’s Cosí Fan Tutte, and Schaunard in Leoncavallo’s La Boheme. He has recently added the role of Omar in Weber’s Abu Hassan to his repertoire, as well as the roles of Silvio in Leoncavallo’s I Pagliacci, the Sheriff in Flotow’s Martha, Achilla in Handel’s Giulio Cesare, and as Mr. Fogg in Sondheim’s Sweeney Todd.

In concert, Mr. Yoder has performed the bass solos in the Requiems of Mozart, Duruflé, Fauré, and Malcolm Archer. He has also delighted audiences in singing the bass solos in the venerable Messiah of Handel, the Coronation Mass, Great Mass in C Minor, and the Missa Brevis in F of Mozart, Haydn’s Paukenmesse, and The Seven Last Words of Christ by Theodore Dubois. A lifetime fan of Bach, he has had the pleasure of performing Bach’s Durchlauchster Leopold (BWV 173a) and Herr, wie du willt, so schicks mit mir (BWV 73) cantatas. He has also prepared the Five Mystical Songs of Ralph Vaughan Williams and Walton’s Belshazzar’s Feast for rehearsal with the Sacramento Choral Society.

He has been blessed to have participated in masterclasses with Yefim Maizel while at the Opera Academy of California, as well as with Dr. Joseph Wiggett while he studied voice at California State University, Sacramento while under the tutelage of Dr. Robin Fisher. In demand for both early music and oratorio, Mr. Yoder frequently collaborates with churches, colleges, and his musical colleagues in the musical community to bring beauty and solace to a world so hungry for it.