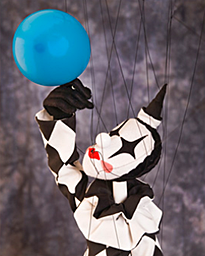 Marionettes have existed for thousands of years, dating back to the days of ancient Rome and Greece. The popular Fratello Marionettes began entertaining audiences in 1989, bringing the ancient art of string-manipulated marionettes to audiences throughout the world. Based locally in the Bay Area, they often perform at schools, libraries and theaters around the West Coast. The men behind the puppets are Kevin Menegus, founder, performer and builder, and Fred C. Riley III, performer and builder. Each marionette is completely handmade by Menegus and Riley, taking two to three months to build an average 30-inch tall marionette for one of their shows. They also do restoration of old marionettes.

According to Menegus, it takes a full year to plan a show, write the script, make the marionettes and to rehearse. The Fratello Marionettes are known for using diverse styles of music in their shows and, interestingly, Menegus studied classical music at the University of the Pacific Conservatory of Music. His fascination with marionettes began when he was six years old. He later studied puppetry as an apprentice with world-class puppeteers Tony Urbano and Bob Baker, as well as Randal Metz and the late Lewis Mahlmann from Children’s Fairyland’s Storybook Puppet Theater in Oakland.

After discovering puppetry in high school, Riley started his professional career at Tears of Joy Theatre where he studied hand puppets with the late Yang Feng. He then moved on to Atlanta’s Center for Puppetry Arts as a resident puppeteer and toured Japan as a performer with the stage shows Obon and Kwaidan, working with leading theatrical director and innovator Ping Chong.